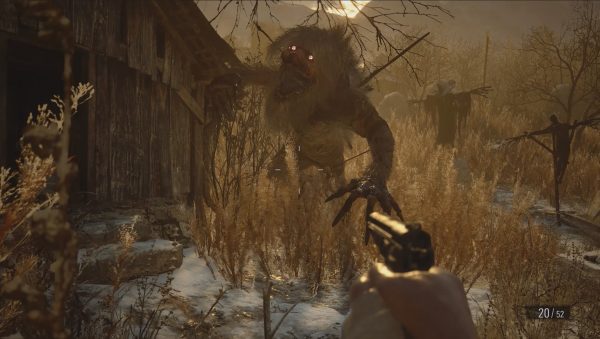 Hiding around every corner in Resident Evil Village is a secret waiting to be discovered. And while there’s plenty of clandestine loot to find, there are a few optional bosses, like the Varcolac Alpha and giant, axe-wielding butcher brothers, to hunt down too.

These tough opponents either appear in their own new spaces, or to punish you for being too comfortable backtracking through areas you thought were safe.

Here’s where you can tango with a few of the optional bosses in Resident Evil Village you might have missed.

Stalking the Fallow Plot in front of Luiza’s house after the sun starts to set on your Resident Evil Village adventure, the Varcolac Alpha is as fearsome as they come.

Bearing the battle scars of more than a few scrapes, you’ll have to empty out some serious ordinance to take him down once he appears following the Moreau section.

Your best bet is to lure the Varcolac Alpha to the stairs at the bottom of the church yard, booby trapping the chokepoint with mines.

The beast doesn’t seem to want to come much further out than these stairs, so you can go to town with your magnum, shotgun, and grenade launcher to take him out.

While the Varcolac Alpha is a unique foe, you actually get to fight the other main optional boss twice.

Basically, they’re just huge guys – a bit like the main boss, Urias – who relentlessly rush you with powerful swings of their giant axe.

The first one appears in front of Claudia’s grave north of the village when you go to collect the dollhouse treasure.

While the second appears at Otto’s Mill, butchering meat in the barn.

Like with most of the boss fights in the game, the best strategy is to backpedal and lead the bosses over mines, then unload with your grenade launcher and shotgun headshots when they get too close.

The post Resident Evil Village Varcolac Alpha | And two other optional bosses you might have missed appeared first on VG247.